What Marketers Need to Know About TikTok Influencer Marketing

TikTok, the popular mobile micro-vlogging and lip syncing platform, has arrived as the next frontier for influencer marketing. As big name brands begin launching campaigns, TikTok has released its own native ads platform. All eyes are on the market newcomer – case studies are being written, headlines are being published, and questions are being asked. While last summer, we wrote a blog post on how micro-vlogging and lip syncing were taking the influencer world by storm, it’s since proven to be more than just a viral trend.

TikTok’s addictive 15-second user-generated videos have satisfied a consumer demand that’s gone largely unmet since Vine shut down in 2016. It’s not just the style of content – other platforms let you do the same thing – it’s the content creators themselves. The resurgence of this style of content, and the creators who are so good at making it, gives marketers a variety of new options for influencer campaigns in 2019 and beyond.

Why is TikTok so popular?

TikTok is making headlines with good reason: Its year over year revenue from in-app purchases more than tripled last year, with 42 percent of it coming from the U.S. Since its debut, TikTok has consistently ranked top 10 in the Top Free Apps category on both iPhone and Android. The app reached 80 million US downloads by November 2018, and reached 500 million active users worldwide in the same timeframe.

As we mentioned before, TikTok’s bite-sized videos are ideal for rapid consumption, and fill the void that Vine’s pithy 6-second loops left behind. Its robust video editing tools give users a variety of options for doctoring up their videos, whether they’re lip syncing to their favorite songs or adding stickers to their comedy sketch. Content categories include everything from comedy and dance to DIY and sports.

TikTok’s feed algorithmically suggests new videos based on what users have previously watched and interacted with, much like YouTube and Instagram. These suggestions are easily “swipeable,” simplifying the browsing experience. Trending hashtags appear in the explore tab, showing users which viral trends, challenges, and people are popular at that very moment. This makes it easy for TikTok users to jump on bandwagons, like the #ShoutOutToMyEx or #FlipTheSwitch challenges, which influencers often help (or are paid to help) popularize. The app also allows users to download any video – albeit with a watermark – with a simple tap.

All these features amount to an even playing field in which anyone on the platform can have their 15 minutes of fame – and the influencers who do it best can secure millions of impressions. But it’s not just what users can do with it, it’s who the users are. TikTok appeals to a younger generation whose humor (and perhaps attention spans) can be easily satisfied in a series of mere 15 second clips.

These user-friendly features, combined with a nascent native ad platform, help contribute to the growing popularity of TikTok worldwide for both users and brands. But some are still not convinced.

Skeptics point to Vine’s demise as proof that short, user-generated videos are not sustainable for a social network. It’s important to bear in mind that it wasn’t Vine’s unappealing content that led to their shutdown, it was their failure to create business value and make money. Vine lacked the sophistication of its competitors, in that it didn’t offer paid ad placements, ecommerce options, or any other forms of content monetization.

Vine’s resistance to monetization and dedication to its original vision meant it could only grow its user base with new content alone. Relying solely on the creativity and virality of its users sowed Vine’s demise. Meanwhile, Instagram debuted Stories with swipe ups and shoppable links, while Snapchat rose to prominence as a communication platform first. With little income and aggressive competition, Vine’s refusal to innovate tolled their death knell.

TikTok, however, has already welcomed monetization with open arms. Building on the base of its predecessor, Musical.ly, TikTok continues to innovate on its successful formula. They routinely add new features to drive engagement to make it a viable option for advertisers without compromising its core content. And all of this is without taking the power of influencers into consideration.

TikTok Influencer Marketing is still relatively new, but it has not gone untouched. There is little in the way of case studies, as the app is only about a year old as of this article’s publication. However, big name brands are using TikTok influencers for multimedia campaigns, which is a good sign that the app is ascending the social media platform ladder. 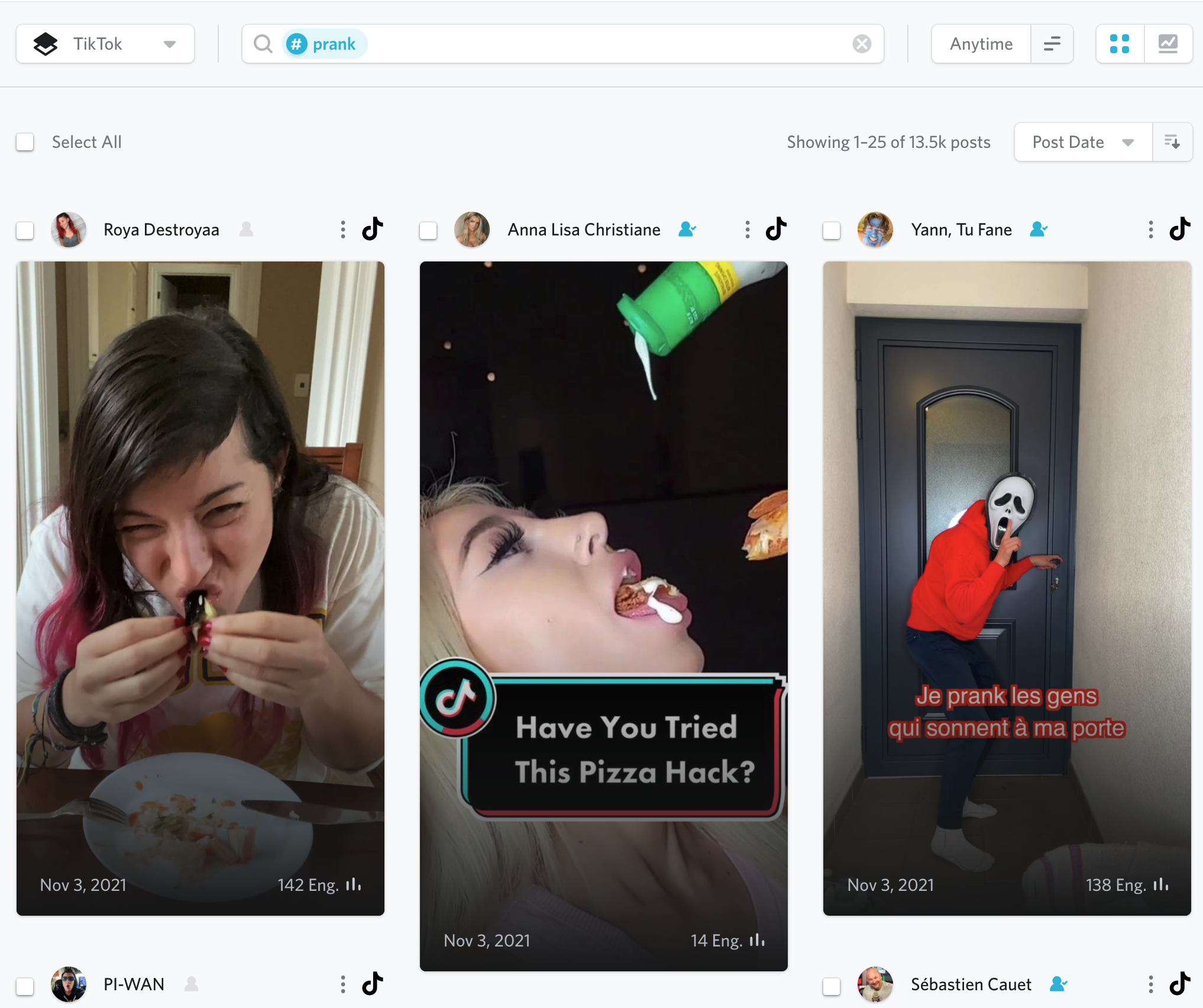 Universal Studios, for example, launched an awareness campaign to promote the movie, “The House with a Clock in its Walls.” Sony used influencers on Tiktok to promote its new movie, “Escape Room.” Guess launched its #InMyDenim campaign on TikTok, targeting millennials and Gen-Zers with a promoted hashtag.

These are just a few of the growing number of brands executing influencer marketing campaigns on TikTok. And there is no shortage of relevant (and significant) influencers on the platform. Sixteen-year-old Loren Gray already has over 30 million fans on the app. LisaandLena have 32.4 million fans, which is more than the amount of subscribers Ariana Grande has on YouTube. Ariana Grande, for reference, just won a Grammy. It’s worth noting that these creators got their start on Musical.ly/TikTok, and didn’t just port their audience over from another platform.

Beyond top tier influencers are millions more that are eager to create, share, and watch on the app. And, given its global appeal, the creators and consumers of TikTok comprise a huge swath of demographics.

Targeting the youth of the world

According to Influencer Marketing Hub, 41 percent of TikTok users are aged 16 to 24. In addition, TikTok users speak over 72 different languages, and 80 percent of them use the app on an Android phone. This is meaningful because Android phones rule the roost in both developing and advanced Asian and South American countries where influencer marketing is booming.

International millennial and Gen-Z Android users are within reach for influencer campaigns, thanks to TikTok’s global reach. Although China’s version, Douyin, is walled off from TikTok and resides behind the Chinese firewall, users in countries like Thailand, India, and Brazil can be easily targeted with TikTok influencers.

For brands that want to take their campaigns global, TikTok presents a potential opportunity for cost-effective awareness campaigns. However, the app still has engagement problems: Only 29 percent of users open the app every day, compared to Facebook and Instagram’s respective 96 and 95 percent engagement rates. Whether this is because the app is still maturing or because the content is not as appealing remains to be seen.

In addition, TikTok is still learning how to navigate content moderation for an app that appeals to primarily younger audiences. Both the New York Times and Vice wrote long exposes on the dangers that unmonitored TikTok use can pose to children. Vice covered a so-called “Nazi Problem,” while the Times took a more holistic approach to TikTok’s (and Chinese social media at large) problem with inappropriate or pornographic content.

Though TikTok recently announced it would almost double the amount of moderators employed, content moderation is an issue endemic to social media on the whole. Facebook is no stranger to controversial content, considering its alleged use in election tampering and the even more sinister Cambridge Analytica scandal. Twitter is still struggling to update its harassment policies, especially with regards to hate speech. Instagram is implementing a variety of solutions to cull its rampant bullying problem, but has yet to find a large-scale solution.

Thus, TikTok’s content concerns should not hinder its potential for influencer success, assuming they work on earnest solutions.

TikTok is at a point in its development where the users are there, the influencers are there, but marketers are waiting for bona fide case studies. Skeptics have pointed to apps like YikYak and HQ Trivia as examples of apps that exploded in popularity but just as quickly fell into irrelevance. There are several differences between them and TikTok that make the comparison inapplicable.

TikTok showcases a style of content that spawned two extremely successful apps, Musical.ly and Vine. It already has options for monetization, and is steadily adding features. Users are flocking to the app, and are gladly sharing creative content to a potentially massive international audience.

The question is not whether TikTok will survive, but how well it can fare against the likes of Instagram, YouTube, and Snapchat.. It won’t replace the day-to-day social media functions of Facebook and Twitter, which prioritize communication and connection over content sharing.

However, while 15-second videos fill a particular role in the everyday content consumption of the average social media user, who’s to say a social media user can’t find content of a similar length and style on YouTube, Instagram, or even Snapchat?

Time will tell, but the signs are pointing to TikTok’s survival. At the moment, it presents a unique opportunity for marketers to tap into global audiences they would otherwise have difficulty accessing on other platforms. And with a style of content that thrives on creativity, a well-done TikTok video can cut through the noise of social media.

There’s already a category in this year’s Shorty Awards for “Best Influencer & Celebrity TikTok Campaign” – as good a vote of confidence as any for the growing platform. In the meantime, ByteDance launched a “TikTok Lite” app that gives users view-only access to the platform. It increases performance at the expense of posting, making the app even more accessible.

Exciting things are in store for TikTok. We expect there to be more campaigns, more data, and more influencers flocking to the platform in the near future. If it can weather the competition better than Vine did, it will likely emerge as a game changer in the current social media landscape.